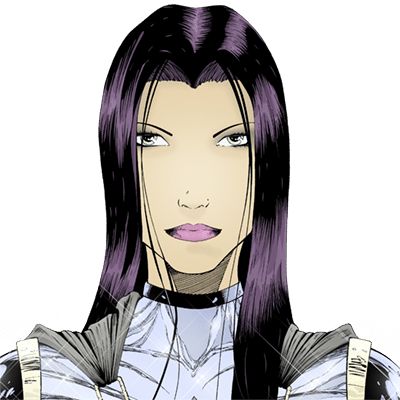 Christy Anders is the leader of a Tenjin strike team based out of  Pacific Estate located in Crawford, Colorado.

Christy was 12 when she discovered she had the ability to cast magical spells. While out on a stargazing trip with her mom and sister, Christy felt a tingling in the back of her head. As the night went on and the excitement of seeing the rings of Saturn for the first time grew, the tingling became stronger.

After a few hours, Christy felt Ashley was not sharing the telescope enough and began pushing her to move. The two sisters began fighting. Quickly, Ashley had the upper hand and pinned Christy down. Just as Ashley was about to punch her in the face, the tingling in Christy’s head formed into words.

The force of the defensive bubble pushed Ashley back almost 40 feet, breaking her left arm, ribs, and left leg.

Their mother had been down by the water and came running when she heard the commotion. Seeing Ashley hurt as badly as she was, their mom told Christy to stop crying, remain calm, and that she was calling for help right now.

A few minutes later, a portal opened up, and out stepped the woman known as Augury and two people known as Tenjin Healers. Augury had felt the power surge from Christy and came to help her understand what was happening to her.

While the Healers worked to help Ashley, Augury sat with Christy to let her know that the tingling she felt in her head was actually Ten’ja communicating with her and blessing Christy with the gifts she now possessed.

As they talked, Augury asks if Christy would like to come to live with other gifted people like herself, to learn how to use her powers, and eventually help others in their time of need. With the pain she caused Ashley still fresh in her mind, Christy declined the offer, wanting to stay with her mom and sister instead.

Augury accepted the answer but before leaving she asked Christy to listen to the voice of Ten’ja,  to allow Her words to offer guidance in the coming months and years.

Over the next 3 years, Christy did little with her powers. Instead, she spent her time focusing on school and sports. It was not until she was 15 that the voice of Ten’ja became too strong to ignore.

Ashley was competing in a science fair when a fellow student’s experiment was knocked over, causing chemicals to mix and explode. Christy attempted to conjure a spell that would put the fire out but was unable to do anything of use.

After a few tense moments of standing outside, Christy was shocked to see Ashley leading a group of people out of the fire. They were all encased in a large cocoon of protective light that seemed to emit from Ashley.

At home that night, Augury once again came to visit. And this time, she asked the sisters to join her at Pacific Estate and become Tenjin. Their mom agreed and the next day the sisters were the newest residents of Pacific Estate.

To make up for the late start in life, Christy’s training began immediately. She spent every hour she could in the library, studying the ancient texts and scrolls. Within two years her knowledge and skill levels were equal to those that had been trading for a decade.

At the age of 19, Christy was sent out on her first active duty assignment with fellow Tenjin from Pacific Estate. It was meant to be a simple recruitment trip for a new member but quickly escalated into a full-fledged battle when members of the Ujikira arrived at the scene.

Christy’s training and instincts played a pivotal role in saving the lives of all Tenjin members as well as the life of the new recruit, Joseph Raider.

Following that battle, Christy was given more assignments in the field. At the age of 23, Christy was promoted to full-field commander of her own 5 member Tenjin response team.

Eleven years after arriving at Pacific Estate, Christy has finally received the news that she is to take the Unifailia. The Trials are the last step in becoming a Tenjin and are different for everyone that attempts them.

The future is uncertain but with Christy’s faith and determination, she is expected to not only be granted Tenjin status by Ten’ja but also become only the thirteenth Kanneshi in Tenjin history.

We use cookies on our website to give you the most relevant experience by remembering your preferences and repeat visits. By clicking “Accept”, you consent to the use of ALL the cookies.
Do not sell my personal information.
Cookie SettingsAccept
Manage consent

This website uses cookies to improve your experience while you navigate through the website. Out of these, the cookies that are categorized as necessary are stored on your browser as they are essential for the working of basic functionalities of the website. We also use third-party cookies that help us analyze and understand how you use this website. These cookies will be stored in your browser only with your consent. You also have the option to opt-out of these cookies. But opting out of some of these cookies may affect your browsing experience.
Necessary Always Enabled
Necessary cookies are absolutely essential for the website to function properly. These cookies ensure basic functionalities and security features of the website, anonymously.
Functional
Functional cookies help to perform certain functionalities like sharing the content of the website on social media platforms, collect feedbacks, and other third-party features.
Performance
Performance cookies are used to understand and analyze the key performance indexes of the website which helps in delivering a better user experience for the visitors.
Analytics
Analytical cookies are used to understand how visitors interact with the website. These cookies help provide information on metrics the number of visitors, bounce rate, traffic source, etc.
Advertisement
Advertisement cookies are used to provide visitors with relevant ads and marketing campaigns. These cookies track visitors across websites and collect information to provide customized ads.
Others
Other uncategorized cookies are those that are being analyzed and have not been classified into a category as yet.
SAVE & ACCEPT